The Book of Life

The Books of Records

Rev 20:12 And I saw the dead, small and great, standing before God, and books were opened. And another book was opened, which is the Book of Life.  And the dead were judged according to their works, by the things which were written in the books.

Whose name will be written in the Book of Life?

The Bible tells us that everyone, from conception, was created and formed by God in our mother's womb.  At that point, according to the Old Testament (Jewish Tanakh) God then recorded that person's name in His Book of Life.

Psm 139:13-16  For You formed my inward parts; You covered me in my mother's womb...my frame was not hidden from You, when I was made in secret...your eyes saw my substance, being yet unformed.  And in Your book they were all were all written...to the very last one of them.

At the time of judgment, only the righteous - those who have their names remaining in the Book of Life will be able to enter into heaven in the presence of God, meaning there will be those whose names will be removed.

Psa 69:27-28 Add iniquity to their iniquity, and let them not come into Your righteousness. May they be blotted out of the book of life, and may they not be recorded with the righteous.(NASV)

Contents of the Book of Life

It was clearly understood by the ancient Jews that one must be righteous to have his or her name written in the Book of Life.  In other words, one must have a relationship with God and walking in covenant obedience to His Word.  Moses pleaded with God not to blot out the names out of those who had sinned against Him. He even asked of God that if He refused, then blot out his name as well.

King David in Psm 69:27, praying on behalf of the sins of the Israelites, beseeched God to not remove his name from His book.

Psa 69:27-28 Add iniquity to their iniquity, and let them not come into Your righteousness. May they be blotted out of the book of life, and may they not be recorded with the righteous.(NASV)

The Bible states that before Christ, all Israelites were under the law and bound by the law.  So then, the question arises whether under the Old Covenant, would sacrificing bring or keep one's name in the Book of Life?  In other words, is one saved by good works? The answer is no.  The reason is, those who are in covenant with God have a love relationship of trust and obedience with their Creator.  While the Old Covenant believers gave sacrifices for sin, it was not their sacrifices that saved them.  What saved them was their covenant relationship with God.  As such, their names were written in the Book of Life.

As we go to the New Testament, we see that Christ spoke to His disciples of a special book of the names of the righteous that are written down in heaven:

Luke 10:20 "Nevertheless do not rejoice in this, that the spirits are subject to you, but rather rejoice because your names are written in heaven."

Here, Jesus was specifically stating to His disciples that to have one's name written in heaven, one must now believe (trust and rely upon) in Him.  There must be a relationship between that person and Jesus Christ - God's Son.  We are not saved through our works, but through our faith in Christ.

Eph 2:8-9  For by grace are you saved through faith.  It is not of work, lest anyone should boast.

Again, those in a covenant relationship with their God have their names written in the Book of Life.  The Apostle Paul repeated the same thing to the Roman Church.

Rom 10:9-10 If you confess with your mouth the Lord Jesus, and shall believe in your heart that God has raised Him from the dead, you shall be saved.

Rev 3:5 He that overcometh, the same shall be clothed in white raiment; and I will not blot out his name out of the Book of Life, but I will confess his name before my Father, and before his angels.   Rev 22:19 and if anyone takes away from the words of the book of this prophecy, God shall take away his part from the Book of Life, from the holy city, and from the things which are written in this book.

These Scriptures make it clear that there is a book in heaven where the names of the righteous are listed who will retain life and spend an eternity in heaven with Christ.

Everyone will stand before God

There is another book that will be opened called the Book of Judgment where all those whose names are NOT written in the Book of Life will be judged for their works and then cast into the Lake of Fire for all eternity to serve out their punishment.  This judgment is called the Great White Throne Judgment where all unbelievers will have to face God before they are cast into hell - the Eternal Lake of Fire.

Rev 20:12-15 And I saw the dead, small and great, standing before God, and books were opened. And another book was opened, which is the Book of Life. And the dead were judged according to their works, by the things which were written in the books. The sea gave up the dead who were in it, and Death and Hades delivered up the dead who were in them. And they were judged, each one according to his works. Then Death and Hades were cast into the lake of fire. This is the second death. And anyone not found written in the Book of Life was cast into the lake of fire. 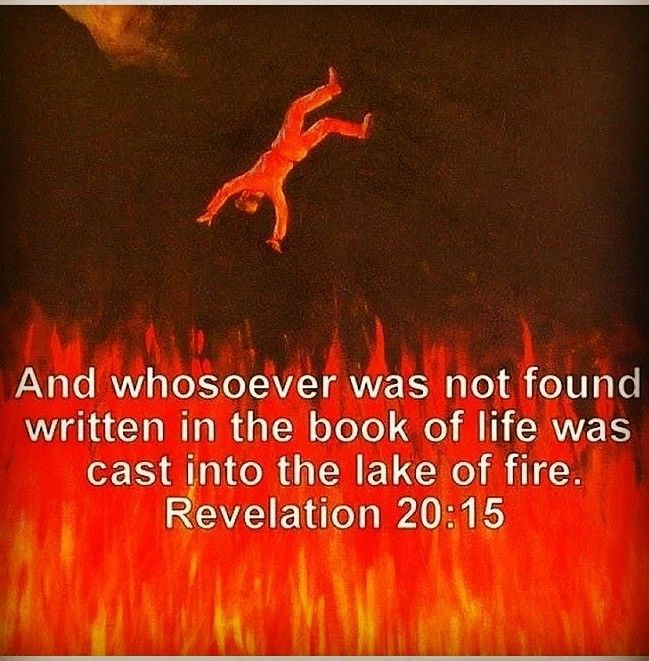 Whether God removes or keeps one's name in the Book of Life until the end of life is unknown, although it appears that God keeps names in His book until the end of one's life, allowing everyone a chance up until the very end to come to Christ. The important thing is to make sure that your name is written in the Book of Life.  Since our day-to-day life is uncertain, today then is our day of salvation.  Don't wait!  Repent, and accept Christ as your Savior and Lord right now.

Rev 3:5 He that overcometh, the same shall be clothed in white raiment; and I will not blot out his name out of the Book of Life, but I will confess his name before my Father, and before his angels.

Isn't it wonderful that as believers in Jesus Christ, our sins have been forgiven?  The record book of Judgment listing our sins have been wiped clean and we will never have to face judgment and punishment for those sins committed while on the earth - all because of the shed blood of Jesus.

There is a third book listed in heaven.  The first book being the Book of Life, the second book, the Book of Judgments, and third, this unknown book.  It is well within the realm of possibility that this book could be the Book of Rewards.  Scripture is silent on this.  We do know, however, that all believers in Christ will stand before the Judgement Seat of Christ to be rewarded for their faithfulness.

2 Cor 5:10 For we must all appear and be revealed as we are before the judgment seat of Christ, so that each one may receive [his pay] according to what he has done in the body, whether good or evil [considering what his purpose and motive have been, and what he has achieved, been busy with, and given himself and his attention to accomplishing]. AMP.

The only book then that an unbeliever would be listed in is in the Book of Judgment.  This book would record all the sins one has committed, along with the extent of the punishment one will receive in the Eternal Lake of Fire.

Is Your Name Written in the Book of Life?

Dear Father in heaven:  I believe that Jesus is Your Son and that He died on the cross for my sins.  I believe You rose Him from the dead.
I choose to accept Jesus as my Lord and Savior right now.  I ask You to forgive me of all of my sins and I purpose to live the rest of my life for You.
In Jesus' name.  Amen

If you said this prayer and meant it with your heart, you can now be assured that your name
is written in God's Book of Life.

"Welcome to the Kingdom of God"