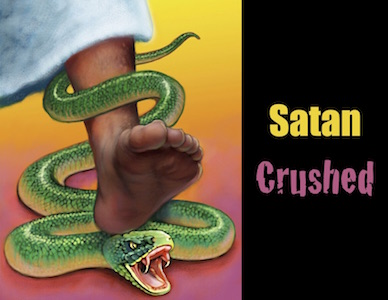 The doctrine of Satan merges within the general doctrine concerning angels. (For more information, refer to the article on Angels). Most angels are known by their purpose and functions, with nothing mentioned of individual angels, with the exception of the three top angels referred to as archangels:  Michael, Gabriel, and Lucifer.  Lucifer, followed by one-third of the angelic hosts, rebelled against God for His throne and was defeated and thrown out of heaven.  He is now referred to as Satan.

"Satan" is a Hebrew word meaning "adversary."  At one time, however, he was an anointed cherub in a top position for God.  As an archangel, he had a host of angels under his authority.  Referred originally as Lucifer, he was one of trillions of angels who could come to the mountain of God and spend time in His presence.  God gave Lucifer rulership over the earth long before the creation of Adam and Eve – probably having the Garden of Eden as his headquarters.  Lucifer, however, used the ability of choice to violate his position and disobey God. Pride set in and he chose to war against his Creator, desiring to be God's superior. Satan wanted more than earth to rule -  he desired to take over God’s place on the throne and rule over all of the worlds.

Lucifer coerced one-third of the angelic hosts of God to battle against God for the heavenly throne; thus a war began in heaven.  Heaven was severed with two forces at war. At God’s command, the archangel Michael, along with a host of God's angels, warred with Lucifer and the angelic beings who chose to follow him. Led by Michael, God's angelic host cast Lucifer and his angelic followers out of heaven and they went spiraling down to earth. Lucifer, the once anointed archangel of God became an arch enemy of God, having his name change to Satan or the devil.  (For more information, refer to the article on Angels).

Lucifer’s fall – the doctrine of Satan

Anything that was under Satan’s domain on earth was shattered into ruins as Lucifer, now renamed Satan, and his angelic followers came plummeting down to the earth.  Earth and all of its inhabitants were destroyed, leaving it without form and void.  Ezek 28:16-18; Jer. 4:23.  This is the first indication we find of a great catastrophe upon the earth.

Because of his original status and authority, Satan had great power over the fallen angelic beings who followed him. In his power, he set up a kingdom of darkness on the earth.   He used his power and authority to attempt to accomplish his position as ruler over the earth. In doing so, he became an arch enemy of God over the souls of all who dwell upon the earth.

The Book of Genesis begins by God’s creation of the heavens and the earth. Nothing is mentioned there of an earlier time of a destructive earth, neandrathal man or beast. Other scripture, however, points out that there was an earlier time when Satan ruled the earth. When God recreated the earth, He spent six days created a beautiful world.  When it was all created, He then created mankind in His image.  God then gave mankind (Adam and Eve) authority over the earth (Gen 1:26).  That act thwarted Satan's authority and put him in submission to mankind.  Satan, through his cunning deceptive devices, won over Adam and Eve, which brought upon the fall and sin of mankind and the curse upon the earth. Man no longer had dominion over the earth, but simply handed his authority over to Satan who then became the god of the earth again. He then became not only the god of this world but over mankind as well.

God made a promise to Satan that a time would come when a Savior would come upon the earth to destroy him and put man back in his right dominion over the earth again.  From that point on, not only did Satan set out to conquer all of mankind, but he targeted the Messianic line to thwart any efforts to overtake his opponent who was promised to be his devourer.  Gen 3:15.

Throughout the Old Testament, Satan is displayed as the fallen angel who was removed from his position of great dignity and honor.  As such, he became the supreme enemy of God. When Jesus, the promised Messiah, hung on the cross and died, Satan believed he had defeated his rival. That, however, was only the beginning of his end. Upon His death, Jesus went to hell, but he went there to make a show of Himself openly to those who resided there. Then on the third day, God raise him from the dead.  He was resurrected.  Satan's defeat was in motion. In several scripture verses, the Bible states clearly that Jesus suffered for the sins of humanity by going to the place of the dead ("sheol/hades") and preach to the unrighteous spirits held in prison, even those who died in the flood of Noah.  1Pet 3:18-22.

Why did Jesus go to hell? He had to fulfill the Scriptures by becoming the sacrifice for the sins of humanity. He descended into hell on the day before Passover and became the eternal sacrifice for sin. He preached to those unrighteous in "sheol/hades" and then declared victory over Satan and delivered the righteous out of their captivity, thus stripping the devil of his authority over mankind.  Eph 4:8-9; I Pet 3:18-19; Rev. 1:18.

His victory wa Satan's defeat. It is written in the book of Matthew that when Jesus died, the veil in the temple was torn in two and there was an earthquake. The graves were opened and after Jesus' resurrection, many of the Old Testament saints who had died ,came out of the graves and walked around Jerusalem. Their presence was witnessed by many.  Matt 27:51-53.

This corresponds with the scripture passages in Ephesians, I Peter, and Revelation about regarding what Jesus did in hell and that He released the Old Testament saints out of "sheol/hades." This is supported by King David, who had died 1000 prior, who stated he knew when he died he would go into the earth, but he also knew that God would one day raise him from the grave and bring him to His presence in heaven (Psm 49:15).  The compartment of the righteous in God was emptied out, never to be filled again. The other compartment, containing the unrighteous, however, continues to fill up, even today. Those who enter in remain captive awaiting their judgment from God.

The Bible refers to Satan principally as Satan or in the New Testament often referred to as devil. The word “devil” is not used in the Old Testament; however, in Hebrew, the word means Abaddon or Apollyon in Greek, meaning “destroyer.” There are at least forty titles attributed to Satan, such as a thief, killer, adversary, Beelzebub, Belial, serpent, prince and power of the air, the evil one, murderer, deceiver, father of lies, tempter, and dragon just to name a few. All these names are evil names befitting his fallen character. Eph 6:12

The Bible refers to Satan’s personality in several ways:

Satan now roams about and seeks to do evil, exercising it through demons whom he controls. (Matt 2:24, Matt 25:41, Rev 12:7 & 9). His purpose has not changed – destroy Jesus and the Messiaic people by taking over the world. It is only a matter of time when he will be defeated, but then, it is also a matter of time before God will win that final victory at the end of time over him and all evil.

The limitations of Satan’s power

Satan’s power is limited, consistent upon deceit and lies. The Bible, on the other hand, bases its premise on truth.  John 8:32.   Man can only be deceived when the truth is distorted by lies. As believers, we never need to fear Satan because he is a defeated foe. In spite of what his personality may be like, we as believers have a far more powerful God living on the inside of us through His Holy Spirit.  1 John 4:4b; Eph 6:11  God has provided a way to not only escape, but be victorious over him. Satan should not be feared, but conquered over in our lives. The final phase of Satan’s work is listed in Rev 20 where he will be bound for a thousand years and then shortly thereafter released for one last effort, only to be cast into the lake of fire for eternity.