Sex is a natural instinct that God created within mankind, but it becomes corrupt when practiced wrongly.  God appointed marriage between one man and one woman to fill that natural instinct and desire.  It was given so that a man and his wife can enjoy each affectionately as they nurture each other in a way that is not only permitted, but encouraged by God.  It was meant to build a loving, caring relationship between a man and woman, and out of that love, children became the expression of that love.  The marriage bed is a very private and personal matter between a married man and his wife.  God designed for man to have one wife, and the wife to have one husband, thus protecting the family unit, protecting against promiscuous immoral sex, out-of-wedlock pregnancies, sexual perversions, and various venereal diseases that have come upon mankind.  The marriage bed is a powerful force against Satan who wants to promote immoral sex of all kinds.

We live in a very polluted world where people have varying degrees of acceptance of judgments for or against sexual immorality.  Sadly, the acceptability has crept into the Church.  God, however sees ALL sex outside of marriage as immoral and worthy of the same judgment.  Let's look at what man may see as digressions of sexual sin - from fornication all the way down to beastiality.  What man sees as separate sins, God sees it all as the same sin - sexual immorality.

1.  Fornication:  Both participators who are not married engage in sex.  This kind of behavior is very accepted in today's society as normal behavior.  In fact, it is assumed by the world that when two people get involved in a relationship, sex will be a normal part of their relationship.  God, however, calls any sex outside of marriage a sin and worthy of judgment (Eph 5:5).

2.  Adultery:  One or both participators engaged in the sexual act are married.  This kind of behavior is happening all around us.  While basically still frowned upon within the populace of people, most people still see it as part of life.  God, however, calls it a sin - a defilement of the marriage bed, and worthy of judgment (Heb 13:4).

3.  Homosexuality:  This kind of perverted sex involves same sex participators - man with a man or woman with a woman.  This kind of perversion goes outside of God's creation of man and woman and the marriage bed.  Sadly, today, we even have laws that not only protect the rights of homosexuals, but they are now allowed to get married, adopt children, and flaunt their sexual preference.  Many are revered by those in the world for their stand (Rom 1:26-28).
We are now also in a day when gender identity is challenged where adults have a legal right to choose which gender they would like to assume.  Sadly, there are surgeons who  perform such sex changes on these diluted or perverted mind of people.  Legislation is now trying to make it legal for children, even young children, to have the ability to choose their own identity without their parents consent.  Parents who do such an abuse to their children will be most definitely judged  by God.

4.  Incest:  Sexual relations between people classed as being too closely related to marry each other.  In the beginning of creation, sexual intercourse between people closely related together had to happen to populate the earth.  As the population as well as sin increased, the genes of mankind became more and more polluted.  God then set down laws, as given to Moses to protect the gene pool of mankind.

Incest also includes having sexual intercourse with a parent, child, sibling, or grandchild.  Any sex with a child is not only considered as incest, it is also considered pedophelia, and worthy of God's harsh judgment (Lev 18).

5.  Pedophelia:  This perverted and deranged sex involves adults with children - even babies.  Sadly, this kind of sex has been around in one form or another over the centuries, but has gotten more and more prevelent throughout time.  As of late, we have seen the massive spreading of this behavior in human trafficking - not only in other countries, but here in the United States.  These women and children are held captives by greedy evil people who use their bodies for financial gain and perverted sexual pleasures (Matt 18:6).

6.  Beastiality:  This sick, perverted and deviant kind of sex with animals is displayed when someone's mind has becomes so deranged to where he or she is willing to have sex with animals.  This kind of sex is not only dangerous, not knowing what the animal is capable of doing, but disease is almost guaranteed and physical death will probably be the end result of this kind of sexual activity (Ex 22:19).

God hates sexual promiscuity and sexual perversion of any kind.  That means that ANY sex outside of marriage (man and woman as God's design) demands God's judgment - the same judgment.

God's judgment is given to anyone who practices any of these immoral sexual behaviors.  His judgment upon their death is to be cast into hell to await their judgment before God at the Great White Throne Judgment.  At that point, these people will be cast into the Eternal Lake of Fire for all eternity.  Thus their judgment will be complete!

God's grace is so loving and kind and He does not want anyone to stay within their sin.  Whether that sin is a sexual sin, lying, gossip, hatred, unforgiveness, or whatever God calls a sin, repentance should always be a believer's lifestyle.

While the world looks at varying degrees and
digressions of sin, God looks at all sin as sin.

When we truly repent before God as I John 1:9 tells us, whatever that sin may be, we can stand clean and forgiven before God.  It's when we allow that sin, or any other sin, to overcome us, we need to understand that all sin has its consequences, and it always puts a wedge in our relationship with God, and without realizing it, we are on the road of carnality, which is a slippery slope that leads only to one place - hell. 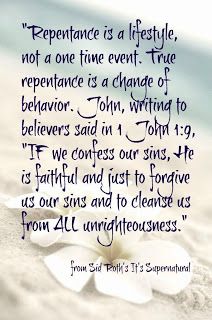