When God Changes Your Name

Throughout the Scriptures you will find that God only changed the names of four people. For a Jew, changing names was something that only God could do; a name was not an arbitrary title, but a designation which pointed to a person’s true identity. God called His people out of sin, and when they responded in faith, He changed their name, changing them to become all that the name represented. The question is then - how does that affect our lives as Christians today?

Abram came from Ur, a land of paganism of many gods. At the age of 75 years God called Abram out to become a man of faith in the "one true God." In His calling, God promised Abram to make him a "man of many nations." While Abram outwardly obeyed God by leaving his birth place of idolatry, he wandered aimlessly from place to place in unbelief in God's promise until he was 99 years of age. At that point, Abram had another encounter with God and finally came to believe in the "one true God" and all that was promised to him. It was then that Abram became a "man of faith."

Gen 15:5-6 Then He (God) brought him (Abram) outside and said, "Look now toward heaven, and count the stars if you are able to number them." And He said to him, "So shall your descendants be." And he believed in the LORD and He (God) accounted it to him (Abram) for righteousness.

Gen 17:1-6 And when Abram was ninety nine years old, the LORD appeared to Abram and said unto him, I am the Almighty God; walk before me, and be thou perfect, and I will make my covenant between me and thee, and will multiply thee exceedingly...thou shalt be a father of many nations. Neither shall thy name any more be called Abram, but thy name shall be Abraham, for a father of many nations have I made thee, and I will make thee exceedingly fruitful and I will make nations of thee, and kings shall come out of thee, and I will establish my covenant between me and thee and thy seed after thee in their generations for an everlasting covenant...and I will be their God.

God also changed the name of his wife Sarai to Sarah meaning "mother of nations and kings of people." She would be the mother of the beginning of their descendants.

When Abraham and Sarah finally came into belief, then God could manifest that change in their lives to become all that God intended them to be. Thus, Isaac was born. The rest of their lives then became a "journey of faith" as God continued that inner work of change for them to live up to their God-given names of Abraham and Sarah.

Rabbinical teachings reveal that the local people in Abraham and Sarah's life continued to call them by their earthly names of Abram and Sarai; however, Abraham and Sarah both knew their God-given spiritual names and their responsibility toward their names.

The next person whom God gave a new name to was Jacob. Grandson to Abraham, Jacob's life had become full of deceit, thus we learn the meaning of his name - supplanter or deceiver. Jacob lived a life of deceit, and as such, received deceit back in return. If God was to continue his everlasting covenant with His people, Jacob needed to change, for he carried the lineage of that covenant that God made with Abraham.

After Jacob deceived his brother Esau, he fled to Haran, the birthplace of his mother. On route, he had an encounter with God through a dream in which he was reminded of the covenant that God had made with his fathers before him, and he knew he was responsible to continue in that covenant. While Jacob knew his heritage and outwardly acknowledged the "one true God," Jacob did not walk a life of faith in the God of his fathers like his grandfather Abraham. Instead, as he fled from Canaan, he bargained with God, stating that if God would go with him and keep him, he would later come back to his father's house in peace - then shall the LORD be his God.

Gen 28:20-22 Then Jacob made a vow, saying, "If God will be with me and will watch over me on this journey I am taking and will give me food to eat and clothes to wear so that I return safely to my father's house, then the LORD will be my God and this stone that I have set up as a pillar will be God's house...

Over the next twenty years, Jacob married, raised twelve children, living in a land of idolatry. He and his Uncle Laban spent those years deceiving each other, yet God's promised hand of protection remained upon Jacob because he was called by God. God then came again to Jacob, calling him back to his land of promise to serve the living God. God again reminded him of His promise to be with him, yet Jacob feared an encounter with his brother Esau when he would enter back into his land of promise.

On route back home, the night before entering into Canaan, Jacob wrestled with an angel of God until daybreak. In that fight, he was injured in the hollow of his thigh, begging to be blessed of God. It was then that God changed his name from Jacob to Israel, changing it from deceiver to prince. 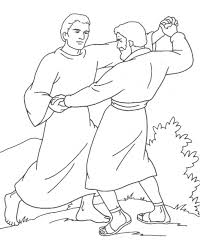 Gen 33:28 And he said, Thy name shall be called no more Jacob, but Israel; for as a prince has thou power with God and with men, and has prevailed.

God gave Jacob (now called to live a life as Israel - prince) favor with his brother and he and his family settled into Canaan. Jacob, however, continued to live a life of trouble in the land in which God had promised him and his family. Instead of living a life of faith in the "one true God" as Israel, Jacob continued to live a life of deceit, thus we see throughout Scripture the names of Jacob and Israel interspersed. God gave him a new spiritual name; however, he kept choosing to live his life as Jacob. Thus, we see the carnal nature of Jacob being displayed in his sons as well.

Gen 49:2 Gather yourselves together, and hear, ye sons of Jacob; and hearken unto Israel your father.

Jacob struggled throughout his life in carnality; whereas when God got a hold of Abraham, he lived a life of faith in the "one true God." In the end, however, Jacob released himself to be Israel whom God had intended for him all along.

In both cases of Abraham and Israel, God changed the person’s name first and then changed the man. In the changing of their name, they were given their promised destination - land.

The Land of Canaan eventually became known as the Land of Israel, and it is God's promise to Abraham and his seed - then, today, and forever.

As we go to the New Testament, we see that Jesus changed Simon’s name to Peter, meaning "stone." Remembering that Jews only acknowledge a name change from God, it is interesting to note that Jesus' disciples accepted that name change. Simon, very much like Abram and Jacob, however, was often called by his earthly name by the local people. He was also referred to as Simon Peter, meaning Peter was his surname - an extra name given to him.

John 1:42 And he brought him to Jesus. And when Jesus beheld him, he said, Thou art Simon the son of Jona: thou shalt be called Peter, which is by interpretation a stone.

God had a divine plan for Peter. He changed his name from Simon (meaning to hear) to Peter, which means stone. While Jesus called Himself the rock, He called Peter a stone. Peter, therefore was called and destined by God for a new mission in life - to begin the Church that was founded on the Lord Jesus Christ. We see Peter's first sermon in Acts 2:14-41. As a result, many received his word and were baptized. About 3000 were added to the church that day.

Matt 21:42 The stone which the builders rejected has become the chief cornerstone...
I Cor :11 For no other foundation can anyone lay than that which is laid, which is Jesus Christ.
Psalm 18:2 The Lord is my rock
Psalm 18:2 And who is a rock, except our God.

As much as we would like to discover that God changed Saul's name to Paul when He called him to be an apostle to the Gentiles, we cannot include him. God did not change his name - Saul chose to use the Greek meaning of his name, meaning Paul, because it was more acceptable to the Gentile people.

Acts 13:9 Then Saul, who also is called Paul, filled with the Holy Spirit...

Perhaps the most interesting name change in all of the Bible is one that is yet to come. As believers in Christ, we are called by God with a plan and purpose to walk out that calling that He has upon our lives.

Eph 1:4 just as He chose us in Him before the foundation of the world, that we should be holy and without blame before Him in love, having predestined us to adoption as sons by Jesus Christ to Himself, according to the good pleasure of His will.

While everyone has earthly given names in this dimension on earth, we, as believers in Christ, are all promised a new spiritual name when we reach our eternal promised destination - our new home in heaven. Jesus has given us His name, which is a sign of his authority over us. While it remains a secret in this dimension, it is already engraved on a beautiful white stone just waiting for our arrival in our permanent eternal promised destination.

Rev 2:17...To him that overcomes...And I will give him a white stone, and on the stone a new name written which no one knows except him who receives it.

Jesus gave His believers His Spirit to do the inner work of change to become all that our name represents. In addition, Jesus gave us His Word to teach us how to live our lives in accordance to His plan and purpose for our lives.

While our new spiritual name is not known to us in this dimension, we can be certain that the meaning of our name represents what He has called us to be - our plan and purpose in this life and for all eternity to come.

As believers in Christ, we all have a call of God on our lives. How vital it is for each of us to know our calling, and to walk out what God has already planted within us. We need to live out our spiritual name - the one written on our white stone in heaven. To do so, we need to spend time in prayer with the Lord, relying upon the Holy Spirit to show us the meaning of our name, and to spend quality time in the Word of God. For this, God will say, well done good and faithful servant.

Matt 25:21...Well done, good and faithful servant; you were faithful over a few things, I will make you ruler over many things. Enter into the joy of your Lord.

How blessed it would be for everyone if all believers in Christ lived out the true meaning of their spiritual name that God has given them. 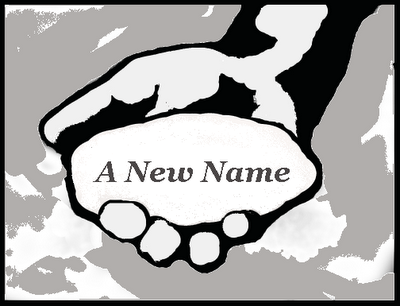 Rev 2:17...To him that overcomes...I will give him a white stone, and on the stone a new name written which no one knows except him who receives it.