The Seed Principle of the Holy Spirit

When we personally come to belief in Jesus Christ, the miracle of the New Birth takes place within us.  Jesus implants Himself within our spirit through the power of the Holy Spirit.

The miracle of the New Birth

When a person comes to recognize his or her sin nature, acknowledging a need for God in his or her life, the Bible tells us that a basic understanding of Who God's Son Jesus is and what He has done for mankind is the key to having God take over one's life.

There are five tenents that the Bible requires for salvation in Jesus Christ:

These basic five points (tenets) of Christianity were preached by the early apostle and are still being preached today.  In the early 2nd century, strange cultic beliefs were attempting to come into the Church aimed at changing the doctrines as set down by Christ and His apostles. To preserve the original beliefs of Christianity, a creed was set up in the Church claiming these five points of Christianity and has been spoken in the Church around the globe for 1900 years.  This creed' however, was never meant as a means of salvation, but a public profession of what had already taken place in that person's heart on his or her belief in who Jesus is.

The Apostle's Creed
I believe in God, the Father Almighty, the Maker of heaven and earth, and in Jesus Christ, His only Son, our Lord: Who was conceived by the Holy Ghost, born of the virgin Mary, suffered under Pontius Pilate, was crucified, dead, and buried;  He descended into hell. The third day He arose again from the dead;  He ascended into heaven, and sitteth on the right hand of God the Father Almighty; from thence he shall come to judge the quick and the dead.  I believe in the Holy Ghost; the holy catholic (meaning universal) church; the communion of saints; the forgiveness of sins; the resurrection of the body; and the life everlasting.  Amen.

When we personally believe (not a mental assent, but a heart trust and reliance upon) what the Bible says about Christ, the Bible then tells us that we need to confess with our mouth to God what we believe in our heart regarding Jesus to receive our eternal salvation.

Rom 10:9-10 that if you confess with your mouth the Lord Jesus and believe in your heart that God has raised Him from the dead, you will be saved. For with the heart one believes unto righteousness, and with the mouth confession is made unto salvation. NKJV

When a heartfelt confession of your belief in Jesus is acknowledged to God, confessing who Jesus is and what He has done for you, a miracle takes place within you - the miracle of the New Birth comes into your life.  God then breathes His Spirit within you. You become alive in God (Rom 10:13, John 3:3).

The Bible uses a variety of terms for that miracle.  When you become saved, born again, or converted, the Holy Spirit is planted within you by God breathing His Spirit into you.  He then seals Himself within you to help you in your walk with Christ throughout the rest of your life until the Holy Spirit within you raises you up to heaven (Rom 8:11, Eph 1:13-14).

Let's look at a seed to learn about the sealing of the Holy Spirit within a believer. As we look at a physical seed, we will also see spiritual principles at work.   We can take any seed – grain, flower, or vegetable seed. 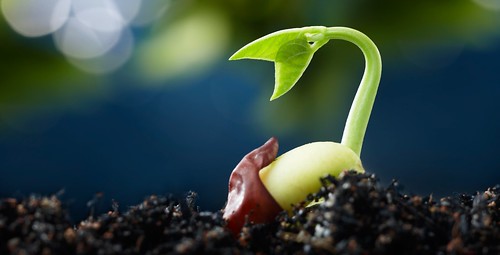 Within a seed, it carries its full potential.  Everything that it will become is carried inside that seed. If you leave the seed alone, however, not giving it any water, sun, cultivation, and fertilizer, it will remain dry and useless.  A lot needs to happen to it before its full potential can be realized.  To expand on a more fuller meaning of the seed principle, let's look at the four laws of nature and compare it to the four spiritual laws of God.

The Law of Gravity

If I took that same seed (or anything else) and dropped it, a physical law that governs the earth would take place.  Gravity would take over and that seed would simply fall.  Nothing would happen to the seed except it would fall downward when dropped. The Law of Gravity (our first physical law) took place.

The Law of Seedtime and Harvest

If I took that same seed and planted it in dirt, watered and cultivated it, giving it the proper amount of sun, water and temperature, that seed would, in full season, sprout up and become the grain, flower, or vegetable that God intended for it to be. Thus we have our second law that governs the earth - the Law of Seedtime and Harvest.

The Law of Night and Day – Four Seasons

The Book of Genesis tells us that forever the earth will always have night and day, as well as four seasons. All places on the face of this globe has always had four seasons even if we don't see extremes in weather. All places also have their seasonal dormant times where plants and trees rest.  After their rest, they begin to bud again and go into full bloom.  This law of night and day and four seasons is the third of the natural laws that governs our earth.

Sadly, Satan perverted this law which God once created as good. There are parts of this earth that experience -30 degrees or even colder and other places which experience +120 degrees or higher. These extremes did not originate with God.  At one point, during the time of Adam and Eve, before the flood of Noah, the temperature of the earth did not vary more than a few degrees. There were no extremes. The Law of Night and Day and Four Seasons, as God originally created the earth to function are necessary components to correspond with the Law of Seedtime and Harvest.  Such places with extreme weather never were God’s original plan.

Rain is good; we need it to water the earth. God’s original design of the earth, however, did not give out rain.  Water came from within the earth. Neither were there thunderstorms, lightning, hail, tornadoes and hurricanes. They didn't come until the Noahic flood. As such, Satan perverted God's beautiful laws, and cursed the earth.

The Law of our Bodily Functions

When God first created Adam and Eve, they were created to live forever - feasting on the Tree of Life every day.  All this is to say, our bodies were created to never die.  When Adam and Eve sinned, however, they and the earth, along with Satan was cursed. God told Adam and Eve that they would surely die. It was at that point when Adam and Eve's lives began to take a downward spiral spin toward death. Adam lived to be 900 years old, and after the flood of Noah, man’s life span rapidly decreased to where today man lives to be around 70+ years. Thus, we have the fifth law - the Law of our Bodily Functions.

God created Adam's body out of dirt. His spirit and soul, however, came from God's breath. God breathed His Holy breath (Spirit) into Adam and he became a living soul. But when He sinned, God warned him, He would have to die. At that point, the Spirit of God left him.  Adam and Eve lost their relationship with his God. When the curse came upon the earth, God forced them out of the Garden of Eden where the Tree of Life was planted. The Tree of Life gave out life-giving water, a critical element for life. The breath of God, His Spirit left leaving man on his own. Sickness, disease, and ultimate death became the penalty for sin against God. Because man was made out of dirt, and because of the curse, Adam, and all succeeding generations died, just as God had warned. To dry dirt Adam returned. What God set up as a beautiful law, Satan perverted with his curse, and man is born into sin and dies in it, just like Adam, UNLESS the Lord intervenes in a person's life.

Our nourishment comes by allowing the indwelling Holy Spirit to help us grow by abiding (regularly living) in the Word of God and having continuous fellowship with the Lord.  That becomes our life force as the indwelling Holy Spirit teaches us how to live.  Therefore, it is critical to spend regular time in God's Word, meditating on how God is telling us on how to live and spending time in prayer getting to know God.

I Peter 1:23 ...having been born again, not of corruptible seed by incorruptible, through the Word of God which lives and abides forever