Who Is the Remnant Church?

When looking at a glass half full of water, there are two ways of looking at it.  The glass can be half empty or half full, depending on your perspective.  This brings me to something that I recently heard preached in church.

Christians have been the ones responsible for bringing religious freedom to America.  They came over on the Mayflower so desiring freedom to worship Christ as their conscience dictated.  These early pilgrims lived under persecution within their country of origin, being forced to worship God as a state religion, of which was dead and dry, having little or no faith.  This caused many to worship God in secret, often being caught and persecuted.  Some were even killed for their faith. These were those whose love for Christ was built on faith and trust in all that Christ did for them, and they so desired to worship and serve Him in return, according to the Word of God.  They were willing to risk their lives to flee from their country, looking for that religious freedom they so longed for, and many of them fled to the new world of America. 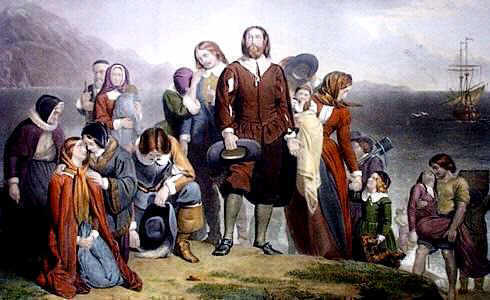 Our country was founded on religious freedom to serve Christ as our conscience dictates.  Our constitution was built on supporting that religious freedom that we treasure so dearly.  Since the founding of our country, Christians have supported our faith through the U.S. Constitution that we hold so dearly.  Sadly, however, there have been unbelievers - those who have undermined what our country stands for, purposing to tear down the foundation of the whole Judea/Christian principles that the U.S. Constitution stands for.  Even more sadly, there have been many in the Church who have not taken their faith seriously, leading carnal fleshly lives, causing division in the Body of Christ, as well as supported unbelievers in their efforts to tear down the fundamental bricks of our Constitution.

I have always grown up with believing that where our country stands today, in the tearing down of our religious freedom, has been because the Church has not been supportive to continuously fight for what Christians of yesterday have fought so hard for.  In other words, it is the Church’s fault our country is in such a mess.  While that is true in part, let’s look at this half-empty glass from a different perspective.

Where I once looked at the Church as a glass that was half empty, suddenly I saw it from a perspective of being half full.   I realized that our country would have long lost its democracy and religious freedom many years ago if it wasn’t for the Church.  Even though many in the Church have refused to live, or even die for Christ, refusing to stand for Truth through silence or carnal fleshly living, they caused our country to digress to where it is at now.  There is, however, still a remnant in the Church who have stood, and is still standing strong for God’s Truth.

That brings me to the point of this article:  God is always looking for His remnant church.  Could you honestly answer this question for me?  Are you part of the Remnant Church to where you will stand strong for the Gospel, standing up for Truth, even in the face of persecution?  Or are you one who keeps silent, flowing with the crowd so as not to make waves, avoiding any persecution that may come your way?  Only you can answer that question.

As a believer in Christ, God has called you to live in this generation.  God is calling you to be a part of the remnant church.  As such, God is asking you to follow the mandates of Scripture to be willing, just as the 1st century Christians and the pilgrims of the Mayflower, to be the Remnant Church?  Can you, like many others throughout our American history, be ready to follow Christ no matter what?  Remember, you were called by God with a plan and purpose.  Do you know your plan and purpose?  Can you say “yes” to Jesus, knowing that your faith is one of “trust and obey…for there is no other way?”

If you are one who is standing up for Truth, even in the face of persecution, would you respond in the comment section below by saying "I stand strong."